Stop me if you’ve heard this one before.

Humanity consumes resources, but resources are finite. Therefore, we are destined to one day run out of resources―but only after we’ve used the existing ones to increase and multiply beyond any limits that careful planning would have allowed. Then famine, plunder, starvation.

This is the defining philosophy of the “mad titan” Thanos from the recent Avengers films; it also defines a tradition of economic thinkers, who include Thomas Malthus (who gave his name to this species of alarmism), Aldous Huxley, and Paul Ehrlich. Most recently, as the world celebrates the fiftieth anniversary of America’s putting a man on the moon, some people have applied this logic to outer space.

“Great swathes of the solar system should be preserved as official ‘space wilderness’ to protect planets, moons and other heavenly bodies from rampant mining and other forms of industrial exploitation, scientists say,” reported The Guardian in May. “The proposal calls for more than 85% of the solar system to be placed off-limits to human development, leaving little more than an eighth for space firms to mine for precious metals, minerals and other valuable materials” (emphasis mine).

In light of these drastic proposals, we should remind ourselves of the long history of failed resource-crisis predictions and the underlying human behavior that always keeps them from happening.

Take Aldous Huxley’s concerns, published in 1958. Though Huxley’s famous novel Brave New World (1932) evinced a vision of the future and human nature that was chilling in its perceptivity, his nonfiction follow-up struggles to grapple with particular real-world affairs. His first concern is population growth, seeing as how the global population was suddenly constituted of “two billion eight hundred million of us.” He elaborates:

“In the Brave New World of my fable, the problem of human numbers in their relation to natural resources had been effectively solved. An optimum figure for world population had been calculated and numbers were maintained at this figure (a little under two bil­lions, if I remember rightly) generation after genera­tion.”

In addition―since apparently most people don’t realize this―the worldwide population is doing pretty well at avoiding famine and starvation. This graph shows the number of absolute people in abject poverty vs. not in abject poverty over the past couple centuries: 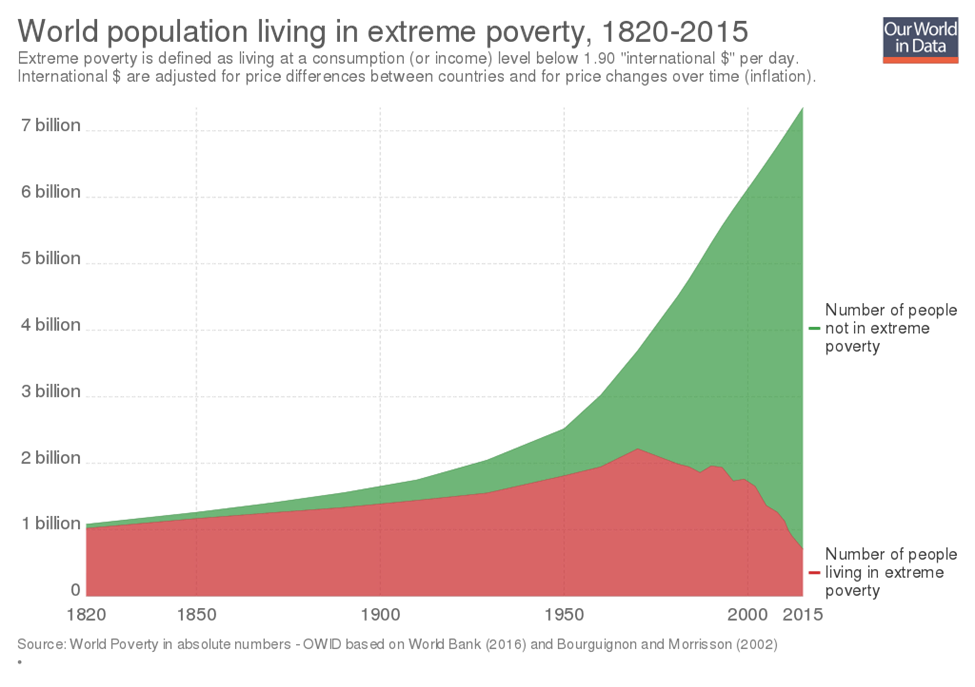 The fears of Paul Ehrlich’s infamous book The Population Bomb, published ten years after Huxley’s nonfiction, are more dire and less forgivable. To discuss one prediction, Ehrlich opened his book with the declaration, under the heading “Too Many People,” that “The rich may continue to get richer, but the more numerous poor are going to get poorer. Of these poor, a minimum of 10 million people, most of them children, will starve to death during each year of the 1970s.”

He was impressively off, both in terms of deaths and death rates. And yet, in the years since, Ehrlich has only doubled down, stating in 2015 that “I do not think my language was too apocalyptic in The Population Bomb. My language would be even more apocalyptic today.” His individual case is a good representative of this deathless alarmism.

Incidentally, I used to be confused by the way Thanos cites his planet’s destruction and Gamorra’s planet’s prosperity as historical evidence for his definitely-wrong theory; then I encountered Paul Ehrlich and remembered how epic-scale historical revisionism is a real phenomenon.

These catastrophes repeatedly fail to happen because, as the economist Thomas Sowell put it, “there is no fixed supply.” The natural world is not a supermarket where any item is either in stock or, when the last item is taken off the shelf, out of stock.

Our technological capabilities keep discovering new ways to find scarce resources or redefine the value of resources so that scarcity is shifting. For example, Henry Ford radically redefined the value of horses. Similar fates befell whale oil (which used to be a multipurpose substance until “the development of superior alternatives”) and squid ink, used for writing until we learned how to synthesize our own.

This also goes for mineral substances that might at first seem to be more stubborn in their supply, like oil. As Thomas Sowell notes, “Certain sands containing oil in Venezuela and in Canada had such low yields that they were not even counted in the world’s oil reserves until oil prices hit new highs in the early twenty-first century.” According to The Economist’s tally (quoted in the same passage), “they contain 174 billion barrels of oil that can be recovered profitably, and another 141 billion that might be worth exploiting if the oil price rises or the costs of extraction decrease―enough to give Canada bigger oil reserves than Saudi Arabia.”

Another key mechanism that keeps the sudden exhaustion of some resource from hitting us is the way that the physical world is gradual. The more you obtain of a resource, the harder it is to get even more of it. For instance, if you have three viable sources for water in your area, you first draw from the most accessible source, and then the next, and finally the hardest. This progression of difficulty typically runs counter to how much of a thing you want; the first glass of water you drink today is crucial to staying hydrated, while glass number thirty is pretty gratuitous.

This is how most resources behave: since each successive source exacts a higher cost from you (in the form of your time, effort, what have you), your consumption of it will ultimately taper off. There’s more of a supply there that you could access if you were willing to make the sacrifices needed to do so, but it just isn’t worth it to you. Sowell offers the example that different oil fields and wells, with different yields, will shut down or resurrect as the price of oil (representing the aggregate demand for oil) falls or rises.

As these resources are enjoyed, developed, and used, our technology continues growing more sophisticated. Artificially crimping our access to them via legislative fiat would hinder our development and our forthcoming innovations.

Which is why it would be a bad idea to swear off most extraterrestrial minerals due to this misplaced concern. As The Guardian continues, “While the limit would protect pristine worlds from the worst excesses of human activity, its primary goal is to ensure that humanity avoids a catastrophic future in which all of the resources within its reach are permanently used up.”

Hope and Faith in the Human Spirit

If Earth is any sort of a model, then our lesson for interplanetary possibilities should be hope and faith in the human spirit. Naysayers lack imagination and are allowing fear to make their decisions for them. Nevertheless, they insist, “‘If we don’t think about this now, we will go ahead as we always have, and in a few hundred years we will face an extreme crisis, much worse than we have on Earth now,’ said Martin Elvis, a senior astrophysicist at the Smithsonian Astrophysical Observatory in Cambridge, Massachusetts. ‘Once you’ve exploited the solar system, there’s nowhere left to go.’”

We should ask this astrophysicist for a little self-reflection. There is still someone alive today who was born when we hadn’t achieved heavier-than-air man-powered flight; we just reached the moon fifty years ago and still haven’t put a permanent base up there; and all this is a mere five hundred years after European civilization became aware of two new continents―imagine what that did to their estimates of the world’s stores of gold, silver, and arable land. (Since then, we’ve learned the exciting fact that there is more molten gold in the sun than water in the earth’s oceans.)

I don’t know what the most economical way of extracting minerals two thousand years from now will be―if iron and cobalt ores deep in the earth’s crust will have long since become cheaper to excavate following innovations in mining, or if ores on other planets and comets will be routinely mined via robot, or if we’ll have developed atomic-grade synthesizers of materials that operate on moons far from human populations that might be affected by radiation.

I know better than to bind the possibilities of humanity to my imagination, however―future generations will have at their disposal the combined imaginative power of the billions, tens of billions, or even trillions of people yet unborn. Even rocket scientists should observe that same humility.

Noah Diekemper studied Latin and Mathematics at Hillsdale College (B.S.) and Data Science at Loyola University Maryland (M.S.). Motivated by a desire to preserve and share knowledge, he contributed to Goodtruebeautiful.net and has also been published in The Federalist, Intercollegiate Review, and The Baltimore Sun. View all posts by Noah Diekemper